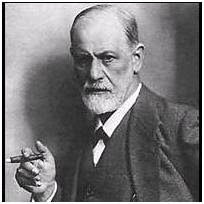 Sigmund Schlomo Freud was born on May 6, 1856, in Freiberg, Moravia, now Pribor, in Czech Republic, the son of Jacob Freud and his third wife Amalia (20 years younger than her husband). Sigi, as his relatives would call him, was followed by seven younger brothers and sisters.
His family constellation was unusual because Freud's two half-brothers, Emmanuel and Philipp, were almost the same age as his mother. Freud was slightly younger than his nephew John, Emmanuel's son. This odd situation may have triggered Freud's interest on family dynamics, leading to his ulterior formulations on the Oedipus Complex.
Freud's father, a Jewish wool merchant of modest means, moved the family to Leipzig, Germany (1859), and then settled in Vienna (1860), where Freud remained until 1938.
When Freud was eight years old, he was reading Shakespeare and, during his adolescence, the hearing of a lecture about Goethe's essay on nature impressed him deeply.
He abbreviated his name to Sigmund Freud in 1877.
Having considered studying law previously, he decided instead on a career in medical research, beginning his studies at Vienna University (1873). As a student, Freud began research work on the central nervous system, guided by Ernst von Brücke (1876), and qualified as doctor of medicine in 1881. He worked at the Theodor Meynert's Psychiatric Clinic (1882-83) and later studied with Charcot, at the Salpetrière, in Paris (1885).
From 1884 to 1887 Freud published several articles on cocaine. "So coca is associated above all with my name" he wrote to Martha Bernays on 16.1.1885.
He married her in 1886. The couple had six children (Mathilde, 1887; Jean-Martin, 1889; Olivier, 1891; Ernst, 1892; Sophie, 1893; Anna, 1895). He established a private practice, specializing in nervous disorders. His interest in hysteria was stimulated by Breuer's and Charcot's use of hypnotherapgy (1887-88). Freud moved to a flat in Berggasse 19 (1891), which turned into The Freud Museum Vienna eighty years later, in 1971.
Freud and Breuer published their findings in Studies on Hysteria (cathartic method) in 1895; in the same year, Freud was able to analyse, for the first time, one of his own dreams, subsequently known as "The Dream of Irma's Injection". He also wrote 100 pages of draft manuscript that were published only after his death, under the name of Project for a Scientific Psychology (1950).
For the next 5 years (1895-1900), Freud developed many of the concepts that were later included in the theory and practice of psychoanalysis.
The term 'psychoanalysis' (free association) was named by Freud in 1896. After breaking with Breuer and reacting to a crisis, due to his father's death, Freud started his self-analysis in 1897, exploring his dreams and fantasies, counting on the emotional support of his close friend Wilhelm Fliess.
The Interpretation Dreams(" Die Traumdeutung"), which Freud considered the most important of all his books, was published in 1899, bearing 1900 as printing date, because he wanted his great discovery to be associated with the beginning of a new century.
The medical world still regarded his work with hostility and he worked in isolation. He started analysing his young patient Dora and The Psychopatology of Everyday Life was published (1901).
He was appointed professor at the University of Vienna and founded the psychological "Wednesday Society" in 1902 (a weekly meeting of friends at his home, when his discoveries were discussed), which became the Viennese Association of Psychoanalysis in 1908.
Three Essays on the Theory of Sexuality, Jokes and their relation to the Unconscious, Fragments of an Analysis of a Case of Hysteria (Dora) were published in 1905.
By 1906, a small group of followers had gathered around Freud, including William Stekel, Alfred Adler, Otto Rank, Abraham Brill, Eugen Bleuler and Carl Jung.
Sándor Ferenczi and Ernest Jones joined the psychoanalytical circle and the "First Congress of Freudian Psychology" took place in Salzburg, which attracted some forty participants from five countries (1908).
In 1909, Freud was invited by Stanley Hall to deliver five lectures at Clark University (Worcester, Mass.), which abstracted the contents of his six previously published books (mentioned above in this biography) and Five Lectures on Psychoanalysis was the German version of this set of lectures, published in 1910. Even though this was his only visit to the United States, this opportunity definitely marked his career, in terms of drawing the world's attention to his work.
The psychoanalytic movement was increasingly recognized and a worldwide organization, called the "International Psychoanalytical Association (IPA)" was founded in 1910. The psychoanalytical magazine "Imago" was founded in 1912.
As the movement spread, Freud had to face the dissension among members of his original circle. Adler (1911) and Jung (1913) left the Viennese Association of Psychoanalysis, and formed their own schools of psychology, disagreeing with Freud's emphasis on the sexual origin of neurosis.
Outbreak of The World War I (1914). Freud received the visits of Rainer Maria Rilke (1915) and Andre Breton (1921).
The first part of the Introductory Lectures on Psychoanalysis was published in 1916. "The International Journal of Psychoanalysis (IJPA)" was founded in 1920.
Freud found out he had cancer of the jaw (1923), and during the next sixteen years, he remained productive, enduring painful treatment and 33 surgeries but never gave up the cigars he was so fond of.
The first volumes of Freud's Collected Works appeared in 1925, time of his conflicts with Otto Rank (birth trauma). Freud was honoured with the Goethe Prize for Literature (1930) and was elected Honorary Member of the British Royal Society of Medicine (1935).
Hitler became Chancellor of the German Reich (1933). The Gestapo searched Freud's house, arrested and interrogated his daughter Anna for one day. Threatened by the Nazi occupation of Austria (1938), Freud emigrated to England with his family and for a short while lived in a house at 20 Maresfield Gardens, which turned into the Freud Museum London, 48 years later, in 1986.At 83 years of age, Sigmund Freud died in London on September 23, 1939. His most enduring legacy has greatly influenced the 20th-century culture.

Human life will never be understood unless its highest aspirations are taken into account. Growth, self-actualization, the striving toward health, the quest for identity and autonomy, the yearning for excellence (and other ways of phrasing the striving "upward") must by now be accepted beyond question as a widespread and perhaps universal human tendency.

And yet there are also other regressive, fearful, self-diminishing tendencies as well, and it is very easy to forget them in our intoxication with "personal growth," especially for inexperienced youngsters. .... We must appreciate that many people choose the worse rather than the better, that growth is often a painful process.... Abraham Maslow, Motivation and Personality.

Posted by AKRAB KPKK No comments:
Email ThisBlogThis!Share to TwitterShare to FacebookShare to Pinterest
Home
Subscribe to: Posts (Atom)